The pavement pros at Asphalt Pavement Solutions have been providing top notch parking lot maintenance services to the Garden State for years, and we love to share our success stories. We have experience in all kinds of pavement work, but we especially love helping clients in towns like Cherry Hill, NJ in Camden County. Commercial property owners in the area can trust that we’ll upgrade their asphalt pavement without breaking the budget.

Recently, we worked with a condominium complex in Cherry Hill, NJ. One of our asphalt consultants worked closely with the property manager to find the solutions to rehabilitate their asphalt parking lot without inconveniencing residents. The existing parking lot was worn and had several cracks that would cause major deterioration if not fixed quickly. After the consultation, we agreed on crack sealing, sealcoating, and then parking lot restriping.

First we used only the highest quality professional crack fillers to fix the parking lot cracks. Next, we laid an asphalt sealcoating over the parking lot to seal smaller cracks, revitalize the asphalt, as well as protect against future wear. Then we painted the parking lines and numbers that would let residents safely drive and park.

Many commercial property managers worry about asphalt repairs interrupting their business, but we got everything done quickly. The condo complex was very organized in moving residents cars, so we were able to seal cracks, coat the parking lot, and restripe it all in the same day. The condominium owner and residents were happy with how it looked and how fast we got it done.

This kind of swift and thorough service is how Asphalt Pavement Solutions became the Cherry Hill, NJ area’s top asphalt contractors. If your local commercial parking lot needs repairs or rehabilitation, contact us right away.

The building owner had recently had the building renovated and wanted to have the parking lot repaired as well. His general contractor, who we have worked for many times, knew we could be trusted with his parking lot needs so he gave us a call. He asked us to come by and assess what needs done as soon as possible but he also needed the project done rather quickly because he needed to get his Certificate of Occupancy on that Monday.

We squeezed his job in over the weekend to met his deadline and got it done. The contractor and customer were both very pleased. The customer commented that the parking lot “looks great” while we were on the job. 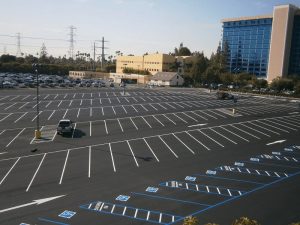 Although the Romans, Babylonians and some other ancient civilizations occasionally used bricks in a contrasting color to mark the center of a road, pavement marking has only been in use for about a century. Previously, piles of stone, short walls or shrubs were sometimes used as medians to separate traffic flowing in opposite directions. However, since horse-drawn carts and pedestrians seldom achieved dangerous speeds on the rough roads of the time, the purpose was primarily to prevent traffic jams rather than enhance safety. Once cars, trucks and buses increased in number, it became necessary to use pavement markings to help prevent accidents.

Painted lines to mark the center of roadways are believed to have first appeared in Michigan around 1911. Allegedly, an official with the Wayne County Board of Roads observed a milk wagon that was leaving a trail of white behind it due to a leak. The first painted dividing line was on a stretch of Trenton’s River Road. By 1917, white lines were appearing throughout the state of Michigan, including a center line along Marquette County’s notorious “dead man’s curve.”

During 1917, Oregon and California implemented official programs for pavement markings similar to what Michigan had undertaken. However, funding for these projects was limited, and some counties and cities refused to invest in pavement markings. A few private citizens financed markings on particularly treacherous stretches of pavement. For example, the sheriff of Multnomah County, Oregon, paid for the paint to mark a stretch of the Columbia River Highway. In Indio, California, Dr. June McCarroll painted a line on a stretch of what is now U.S. Route 99 after a truck forced her car into a ditch.

In the early days of pavement markings, every state, town or county could specify the color of paint to be used as well as whether to use solid or broken lines. This led to a great deal of confusion for drivers venturing outside of their immediate area. A broken yellow line in one state, for example, might signify that passing was allowed, but in a neighboring state, the marking might indicate that passing was prohibited.

In 1971, the Federal Highway Administration released new guidelines that were eventually adopted by all states. Yellow was chosen as the color for markings that divided opposing traffic, and white was chosen for markings appearing in lanes traveling in the same direction. Either color can be used for striping parking lots. Blue paint normally signifies handicapped spaces, and red generally denotes a no-parking area.

Although reflective buttons and mechanical devices are sometimes used as lane markers, painted pavement markings are by far the most common. Due to environmental concerns, pavement paints containing solvents such as naphtha or toluene have been banned in some jurisdictions. Most pavement markings today use either water-based paint or thermoplastics.

Water-based pavement paints are ideal for temporary markings or areas that receive very little traffic. These markings seldom last longer than four years, and if subjected to high volumes of traffic, they may wear out in less than two years..

To Learn More About Pavement Markings

Asphalt Pavement Solutions has been providing our services to customers throughout New Jersey, Pennsylvania and Delaware since 1983. We offer a wide range of services, provide exemplary work and charge reasonable rates. Whether you need parking lot striping and pavement markings for a parking lot or a city street, we can help. We also offer sealcoating, asphalt repair and paving services. For a free estimate, submit the online form or call (856) 461-1710 or (800) 559-SEAL.

Is It Possible To Remove Pavement Markings

Removing pavement markings is part of every professional asphalt contractor’s job description. Traffic flows may need to be altered, parking lots may have to be reconfigured or parking spaces may need to be removed from “reserved” status. There are many methods that the contractor might use to remove pavement markings, based on budget, scope and other factors. The three most commonly used techniques are sand blasting, scarifying and water blasting.

Is It Possible To Remove Pavement Markings – How It Works

• Sand Blasting: You may already be familiar with the term “sand blasting.” The basic technique has been used for decades to remove paint from metal surfaces. For removing pavement markings, finely grained sand is delivered under high air pressure through a nozzle that is directed at the markings. The sand strips away the markings with relative ease. This method is one of the most economical and effective options for removing pavement markings. However, it can create quite a mess that must be cleaned up, and sand blasting can leave marks on the asphalt although they tend to disappear with time.

• Scarifying: For many years, scarifying was the method preferred by many transportation agencies for removing lines on roadways. Scarifying is a technique in which a machine follows the line to be removed. The machine has a rotary cutter wheel that removes the marking and a very thin layer of asphalt. Therefore, this method leaves behind visible signs that the pavement was once marked in that location. Although the process is cost-effective, it is not the best solution for environments in which appearance is of primary importance.

• Water Blasting: Water blasting is similar to sand blasting, but substitutes water for sand. A nozzle delivers very fine jets of water at pressures of at least 40,000 psi. These jets of water are extremely effective at peeling away pavement markings while leaving the asphalt undamaged although some minor marks can sometimes be left on the pavement temporarily. Of the three methods discussed here, water blasting is typically the most expensive, but it also is the least damaging to the pavement.

In addition to these three methods, there are other techniques that can be used to remove pavement markings. At Asphalt Pavement Solutions, we know that each job is different, and each client has different needs. Our team members are experts at determining which removal method is most suitable for the job. We have more than 35 years of industry experience, offering parking lot striping, asphalt sealcoating, asphalt paving, crack repair and more to clients throughout Pennsylvania, New Jersey and Delaware. To learn more, call us at (856) 461-7710, (856) 544-3990 or toll-free at (800) 559-SEAL. If you prefer, you can use our online form to request a free quote.

Is it time to re-stripe your parking lot?

Re-striping is the process of painting new lines or touching up existing lines in a parking lot. Many parking lot owners hold off on this valuable service, but there are important reasons to prioritize re-striping.

Benefits of Re-Striping a Parking LotThere are plenty of benefits to be enjoyed as a result of a re-striping service.

Knowing when a parking lot needs to be re-striped is a matter of paying attention to the appearance of lines, arrows and lane markings. A lot can be re-striped whenever these lines appear to be faded, disjointed or otherwise unclear. It’s important for lot owners to contact a professional as soon as lines start to show wear to ensure that they remain clear.

Re-striping is an important part of conveying a professional image to customers. Asphalt Pavement Solutions has been making parking lots look their best for over 30 years. Professionals work hard to ensure that every line is carefully placed to improve safety, increase traffic efficiency and boost curb appeal. Find out more about how affordable this essential service can be by filling out a form to obtain a free quote or calling us directly at 1.800.559.SEAL.

In the Philadelphia area, and throughout Pennsylvania, New Jersey, and Delaware, we specialize in asphalt sealcoating, asphalt paving, parking lot striping, and asphalt repair!

Asphalt Pavement Solutions was established in the spring of 1983 by its current President, John Verzi. It started out as a PT weekend residential driveway business which took hold very fast. By 1984 APS became a full-time asphalt maintenance company specializing in Sealcoating, hot rubberized crack sealing and line striping.