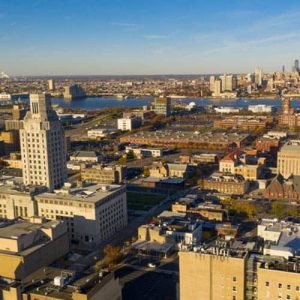 For over thirty years, Asphalt Pavement Solutions has been serving New Jersey with the best paving services. In New Jersey’s Camden County, we’re the trusted paving contractors because we’ve been professionally installing and repairing asphalt pavement since 1984. We’ve become the asphalt leaders by focusing on customer satisfaction, though we’ve completed a variety of parking lot paving projects.

All About Camden County, NJ

As of the estimated 2019 US Census, Camden County is the 8th most populous county in the Garden State with a population of just over half a million. In 1844, the county was formed and named after the Earl of Camden Charles Pratt, a British statesman who supported the American Revolution. Most of the county’s landmarks and municipalities are named for the early European settlers who built the historic sites and homes that still exist today. Over the centuries, Camden County supplied the tristate area with agricultural products and labor for growing industries, and rail lines and bridges built in the twentieth century connected the area with Philadelphia, PA. The county also houses a portion of the New Jersey Pinelands National Reserve, a national park providing residents and visitors with lots of outdoor activities.

Since it is so close to many large urban areas, the county is part of the Delaware Valley Metropolitan Statistical Area, and many of the smaller communities serve larger cities like Camden, Wilmington, and Philadelphia. Read more about these vibrant Camden County, New Jersey communities.

As the seat of the county of the same name, Camden is one of the oldest settlements in the county and home to a campus of Rutgers University. Rutgers is one of the largest employers in the area and provides valuable cultural activities for residents. Famous poet Walt Whitman lived and died in Camden in the late 19th century, and visitors can visit a historically recognized house on Mickle Boulevard as well as Whitman’s Tomb in Harleigh Cemetery. For more history, visitors will enjoy Battleship New Jersey Museum and Memorial on the Delaware River, but there are also several modern attractions such as the Adventure Aquarium. Cooper River Distillers offers local brews, and the many local eateries such as Donkey’s Place offer exciting local fare.

With a 2010 Census population of around 30,000, Voorhees is one of the most populous and fastest growing New Jersey suburbs of Philadelphia. Being a bedroom community doesn’t mean that the town doesn’t have its own rich history with many nationally recognized historic sites like the Whitman Stafford House, a quaint farmhouse where Walt Whitman lived in the late 19th century. The town has nationally-recognized schools and is home to the largest branch of the Camden County Library, making it a great place for families to live. Visitors also have a lot to do at local venues like Voorhees Town Centre, which offers local shops and restaurants, or they can enjoy local brews with a tour from BrewBusNJ.

Located in the Delaware Valley coastal plain, Cherry Hill is considered to be an “edge city” of Philadelphia, PA, providing a small town feel within a larger urban area. The town has historically provided Philadelphia with labor and goods, a trend that continues to this day. That said, Cherry Hill has its own culture, with many historic sites dating back to the days of the first European settlements in the area. Cherry Hill Mall is a popular local attraction, and visitors can also find fun experiences at the many game rooms like Chopper’s Hatchet House or the Big Event Entertainment Experience.

Named after a Lenape Native American word for “tobacco pouch,” Pennesauken is a rapidly growing township across the Delaware River from Philadelphia, PA, connected by the Besty Ross Bridge. The 2010 Census population of around 35,000, which continues the trend of growth shown by recent censuses. The town has the distinction of being the site of America’s first drive-in movie theatre, the Camden Drive-In, built in 1933. Double Nickel Brewing Company and Moore Brothers Wine Company are great places to sample some local adult beverages, and visitors can also enjoy local fare at The Pub, a local steakhouse in a historic building.

One of the oldest townships in the Garden State, Gloucester was formed in 1695 as part of Gloucester County, incorporated into Camden County when it was created in 1844. One of the most famous historic sites in the county is the Gabreil Daveis Tavern House, also known as the Hillman Hospital House, built in 1756 on Timber Creek. Visitors can learn about history there or enjoy the outdoors at nearby Timber Creek Park. The Rowan College of South Jersey campus provides local residents with valuable educational opportunities and runs a nature center nearby.

Incorporated along with other Camden County townships in 1845, Winslow, NJ is a growing bedroom community for larger cities in the area, with their 2010 population of nearly 40,000 reflecting the area’s rapid growth. The town is also the county’s largest municipality at 58 square miles. It was originally named after the family who owned the Winslow Glass Works, as the area was known for their glass in the nineteenth century. In modern times, many residents enjoy a high quality of life in local residential communities. The most popular attraction is the Pinelands National Reserve, a national park that provides opportunities for hiking, fishing, and tons of outdoor activities and nature education.

Asphalt Pavement Solutions was established in the spring of 1983 by its current President, John Verzi. It started out as a PT weekend residential driveway business which took hold very fast. By 1984 APS became a full-time asphalt maintenance company specializing in Sealcoating, hot rubberized crack sealing and line striping.